(i) The hormone that regulates the basal metabolic rate.
(ii) The part of the internal ear related to the static balance of the body.
(iii) The soluble protein in blood plasma responsible for blood clotting.
(iv) The gaseous plant hormone.
(v) The uptake of mineral ions against the concentration gradient.

(b) Choose the correct answer from the four options given for each below: [5]

(iii) A cell has five pairs of chromosomes. After mitotic division, the number of chromosomes in the daughter cells will be:
A. Five
B. Ten
C. Twenty
D. Forty

(v) The most primitive ancestor of man is:
A. Homo habilis
B. Cro- magnon
C. Neanderthal
D. Australopithecus

(d) Give the exact location of each of the following structures: [5]

(e) Given below are five sets of terms. In each case arrange and rewrite each set so as to be in a logical sequence. One is done as an example for you: [5]

(f) Identify the odd term in each set and name the category to which the remaining 3 belong. [5]

(g) The diagram given below represents a plant growing in a glass jar. The glass jar is placed near a window. Study the diagram and answer the questions that follow: [5] 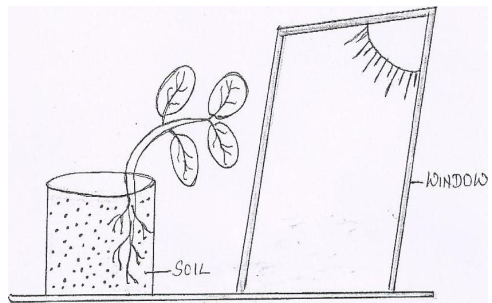 (h) Match the items of Column A with those in Column B and rewrite the correct matching pairs: [5]

(a) Study the diagrams given below and answer the questions that follow: [5] 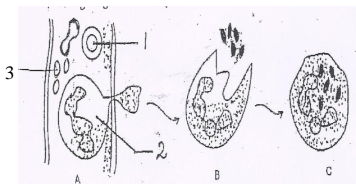 (i) Name the cells labelled 1, 2 and 3.
(ii) Identify the phenomenon occurring in A. Explain the phenomenon.
(iii) Mention two structural differences between 1 and 2.
(iv) Name the process occurring in B and C.
(v) State the importance of this process in the human body.

(b) Give one difference between each of the following pairs on the basis of what is given in the brackets: [5]

(a) An outline sketch of a tree is shown in the diagram below. Study the same and answer the questions that follow: [5]

(b) Mention the exact function of the following structures: [5]

(a) Given below is a diagrammatic representation of a defect of the human eye which has been corrected using a suitable lens. Study the diagram and answer the questions that follow: [5] 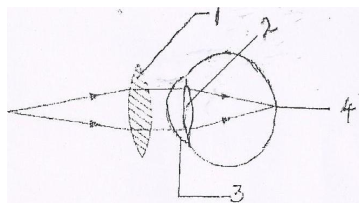 (i) Identify the defect that has been corrected.
(ii) Mention two reasons for the above defect.
(iii) Label the parts numbered 1 to 4.
(iv) State the functions of the parts numbered 3 and 4.
(v) What maintains the shape of the eye ball?

(b) Give the biological / technical terms for the following: [5]

(i) The quick actions which are involuntary and controlled by the spinal cord.
(ii) The structure formed after the release of ovum from the Graafian follicle.
(iii) The surgical technique used in human females to prevent pregnancy.
(iv) The stage of cell division in which the nuclear membrane disappears and the Chromosomes become short and thick.
(v) The onset of menstruation in a young girl of 13 years.
(vi) The canal through which testes descend into the scrotum just before birth in a human male baby.
(vii) The repeating components of each DNA strand lengthwise.
(viii)The site of photosynthesis in a plant cell.
(ix) The constituents which cause the natural quality of the environment to deteriorate.
(x) The defect of vision in which some parts of the objects are seen in focus while the others are blurred.

(a) The diagram below represents an experiment to demonstrate a particular aspect of a physiological process in plants. Study the diagram and answer the questions that follow: [5] 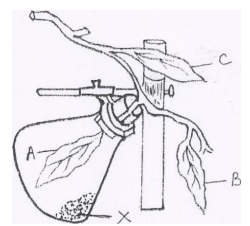 (i) What is the aim of the experiment?
(ii) What is the chemical substance named X in the diagram? What is the special condition created inside the flask due to the presence of the substance X?
(iii) In what way will the three leaves A, B and C differ at the end of the experiment when tested with iodine solution?
(iv) Write the overall chemical equation for the process mentioned in (i).
(v) Explain the term 'Destarching'

(b) Briefly explain the following: [5]

(a) Given below is the diagram of the male reproductive system and its associated parts in the human body. Study the diagram and answer the questions that follow: [5]

(b) Give scientific reasons for the following statements: [5]

(i) Foetus cannot develop without placenta.
(ii) Throat infections can lead to ear infections.
(iii) We feel blinded for a short while entering a dark room when coming from bright light.
(iv) Urine is slightly thicker in summer than in winter.
(v) Loss of nucleus and mitochondria make erythrocytes more efficient in their function.

(b) Answer the following questions briefly: [5]

(i) Mention two features of a Neanderthal man.
(ii) What are the age restrictions for marriage by law for boys and girls in India?
(iii) State two objectives of ‘Swachh Bharat Abhiyan’.
(iv) Mention two functions of the amniotic fluid.
(v) List two reasons for the population explosion in India.

Get updates on CISCE