Study Guides for ICSE Board

Attempt all questions from this Section

(i) The organization which procures and supplies blood during an emergency.
(ii) The blood vessel which supplies blood to the liver.
(iii) The number of chromosomes present in a nerve cell of a human being.
(iv) The layer of the eyeball that forms the transparent Cornea.
(v) The wax-like layer on the epidermis of leaves which reduces transpiration.

(b) Choose the correct answer from each of the four options given below: [5]

(ii) Which one of the following is non-biodegradable?
A. DDT
B. Vegetable peel
C. Cardboard
D. Bark of trees

(iii) Aqueous humour is present between the:
A. Lens and Retina
B. Iris and Lens
C. Cornea and Iris
D. Cornea and Lens

(iv) A strong chemical substance which is used on objects and surfaces in our surroundings to kill germs:
A. Cresol
B. Carbolic acid
C. Iodine
D. Mercurochrome

(v) Which one of the following is a Greenhouse gas?
A. Oxygen
B. Methane
C. Sulphur dioxide
D. Nitrogen

(d) Match the items given in Column A with the most appropriate ones in Column B and rewrite the correct matching pairs. [5]

(e) Correct the following statements by changing the underlined words: [5]

(i) Normal pale yellow colour of the urine is due to the presence of the pigment Melanin.
(ii) The outermost layer of Meninges is Pia mater.
(iii)The cell sap of root hair is Hypotonic.
(iv) Xylem transports starch from the leaves to all parts of the plant body.
(v) Nitrogen bonds are present between the complementary nitrogenous bases of DNA.

(f) Choose between the two options to answer the question specified in the brackets for the following: [5]

An example is illustrated below.
Example: Corolla or Calyx (Which is the outer whorl?) Answer: Calyx

(g) Given below is a representation of a type of pollution. Study the picture and answer the questions: [5] 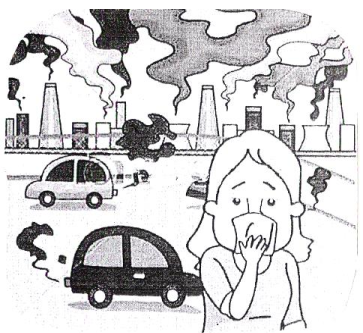 (i) Name the type of pollution shown in the picture.
(ii) Name one source of this pollution.
(iii) How does this pollution affect human health?
(iv) Write one measure to reduce this pollution.
(v) State one gaseous compound that leads to the depletion of the ozone layer and creates ‘Ozone holes’.

(h) Choose the ODD one out from the following terms given and name the CATEGORY to which the others belong: [5]

Attempt any four questions from this Section

(a) The diagram given below represents a stage during cell division. Study the same and answer the questions that follow:  [5]

(i) Identify whether it is a plant cell or an animal cell. Give a reason in support of your answer.
(ii) Name the stage depicted in the diagram. What is the unique feature observed in this stage?
(iii) Name the type of cell division that occurs during:
1. Replacement of old leaves by new ones.
2. Formation of gametes.
(iv) What is the stage that comes before the stage shown in the diagram?
(v) Draw a neat, labelled diagram of the stage mentioned in (iv) above keeping the chromosome number constant.

(a) Given below are diagrams showing the different stages in the process of fertilisation of an egg in the human female reproductive tract. Study the diagrams and answer the questions: [5]

(i) Arrange the letters given below each diagram in a logical sequence to show the correct order in the process of fertilisation.
(ii) Where does fertilisation normally take place? What is ‘Implantation’ that follows fertilisation?
(iii) Mention the chromosome number of the egg and zygote in humans.
(iv) Explain the term ‘Gestation’. How long does Gestation last in humans?
(v) Draw a neat, labelled diagram of a mature human sperm.

(b) A potted plant with variegated leaves was taken in order to prove a factor necessary for photosynthesis. The potted plant was kept in the dark for 24 hours and then placed in bright sunlight for a few hours. Observe the diagrams and answer the questions. [5]

(i) What aspect of photosynthesis is being tested in the above diagram?
(ii) Represent the process of photosynthesis in the form of a balanced equation.
(iii) Why was the plant kept in the dark before beginning the experiment?
(iv) What will be the result of the starch test performed on leaf ‘A’ shown in the diagram? Give an example of a plant with variegated leaves.
(v) Draw a neat labelled diagram of a chloroplast.

(a) The diagram given below shows the internal structure of a spinal cord depicting a phenomenon. Study the diagram and answer the questions: [5]

(b) Give appropriate biological or technical terms for the following: [5]

(i) Process of maintaining water and salt balance in the blood.
(ii) Hormones which regulate the secretion of other endocrine glands.
(iii) Movement of molecules of a substance from their higher concentration to lower concentration when they are in direct contact.
(iv) The condition in which a pair of chromosomes carry similar alleles of a particular character.
(v) The complex consisting of a DNA strand and a core of histones.
(vi) The onset of menstruation in a young girl.
(vii) Squeezing out of white blood cells from the capillaries into the surrounding tissues.
(viii) The fluid which surrounds the foetus.
(ix) The relaxation phase of the heart.
(x) The difference between the birth rate and the death rate.

(a) The diagram given below is that of a structure present in a human kidney. Study the same and answer the questions that follow: [5] 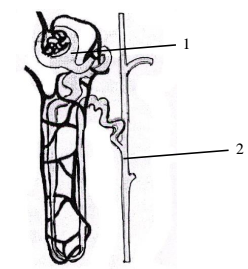 (i) Name the structure represented in the diagram.
(ii) What is the liquid entering part ‘1’ called? Name two substances present in this liquid that are reabsorbed in the tubule.
(iii) What is the fluid that comes to part ‘2’ called? Name the main nitrogenous waste in it.
(iv) Mention the three main steps involved in the formation of the fluid mentioned in (iii) above.
(v) Name the substance which may be present in the fluid in part ‘2’ if a person suffers from Diabetes mellitus.

(b) Differentiate between the following pairs on the basis of what is indicated in the brackets. [5]

(a) Given below is a diagram of a human blood smear. Study the diagram and answer the questions that follow: [5] 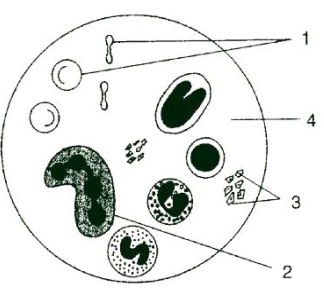 (b) Give biological explanations for the following: [5]

(i) Education is very important for population control.
(ii) The placenta is an important structure for the development of a foetus.
(iii) All the food chains begin with green plants.
(iv) Plants growing in fertilized soil are often found to wilt if the soil is not adequately watered.
(v) We should not put sharp objects into our ears.

(a) The diagram below represents a process in plants. The setup was placed in bright sunlight. Answer the following questions: [5] 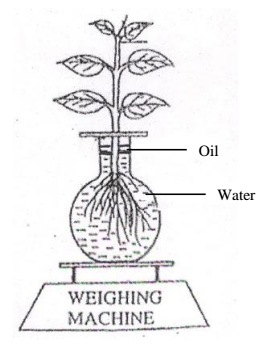 (i) Name the physiological process depicted in the diagram. Why was oil added to the water?
(ii) When placed in bright sunlight for four hours, what do you observe with regard to the initial and final weight of the plant? Give a suitable reason for your answer.
(iii) What happens to the level of water when this setup is placed in:
1. Humid conditions?
2. Windy conditions?
(iv) Mention any three adaptations found in plants to overcome the process mentioned in (i).
(v) Explain the term ‘Guttation’.

(i) Give the phenotype and genotype of the F1 generation. Which type of pollination has occurred to produce F1 generation?
(ii) Write the phenotypic ratio of the F2 generation.
(iii) Write the possible combinations of the gametes that can be obtained if two F1 hybrid plants are crossed.
(iv) State Mendel’s law of ‘Segregation of Gametes’.
(v) What is the scientific name of the plant which Mendel used for his experiments on inheritance?

Free updates at your email